This was my second Type 94. I got it as part of a multi-gun deal in March, 2005. It is quite remarkable how much difference there is in the roughness of the finish between this one and the 18.7 I have (of course, since the latter is an “off-date” it was probably made a year or so earlier than the date marked on it, so we are really looking at around two years of deterioration in attention paid to cosmetic finishing like polishing). 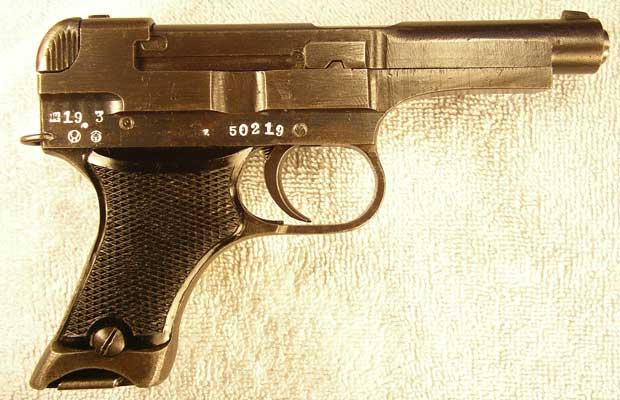 Here is the left side. The bar with the circular end on it that runs from just above and to the right of the trigger screw back to the safety is the sear bar. Because it is exposed, the gun can be fired by pressing on the forward part of the bar if the safety is off. It requires a deliberate effort to do so, however. There are stories of Japanese troops pretending to surrender and using this feature to fire their guns one last time at their captors, but these stories seem to be apocryphal; I have not heard of a single actual case of this happening, and I have looked. 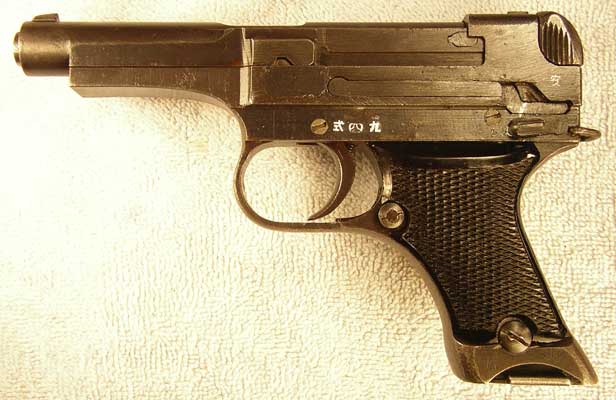 Below the date (Showa 19.3, or March, 1944) there is the Nagoya Arsenal mark on the left and the symbol of Kijiro Nambu’s company below it (the kanji Nan/Nam, which is the first part of his surname). All Type 94s were made by Chuo Kogyo, As his company had become known after a merger in the late 1930s. The order and placement of these two symbols varies over time. On early guns they were placed closer to the serial number, then when they were first moved to the position shown here the order was the opposite of the one on this late gun (i..e. the Nan/Nam came before the Nagoya Arsenal symbol). 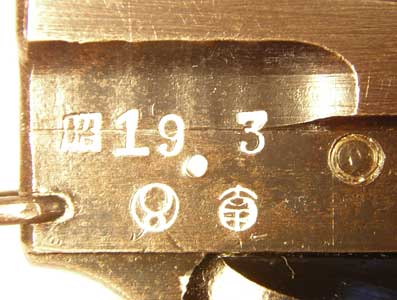 Here is the serial number in close-up. The little mark over to the left is the kanji To as in , which was used as an inspection mark.

The trigger on this one is blued; the 18.7 has a strawed trigger (golden-coloured from heat treatment). 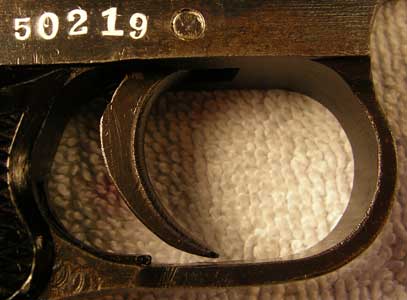 To simplify machining the factory cut straight into the frame and then used three panels to cover these holes. This is the one on the right side that covers the area where the locking block sits (the silver covered bit in the centre of the photo). 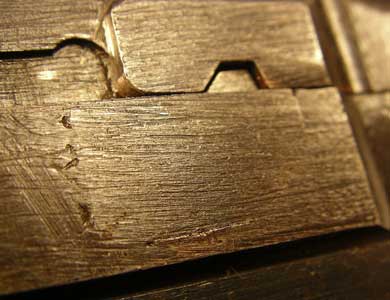 This is the one on the left side that serves the same purpose. On early guns this is so well done that the panels are hardly visible, but they are pretty obvious on later guns like this. Note the two dimples at the upper right and left of the panel where it was peened into place. 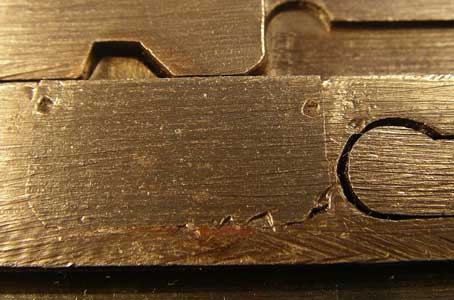 Here is the panel on the back of the gun above the lanyard loop. 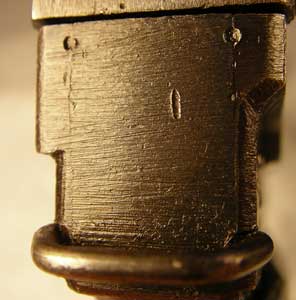 The under side of the frame shows the typical late war lack of attention to polishing. 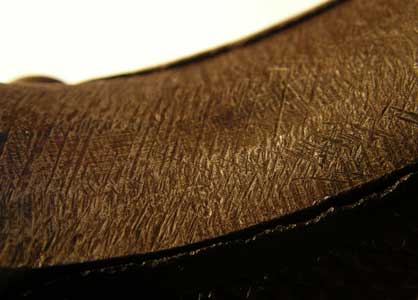 The same is found everywhere, such as on the sides of the frame and slide (right side shown here). Often a gun which is mint and never issued looks so rough to the unitiated that it is mistaken for a well-worn specimen. 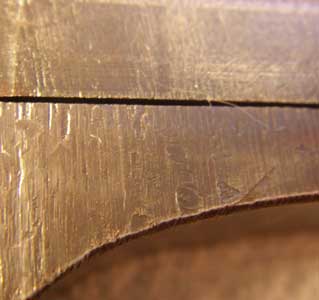 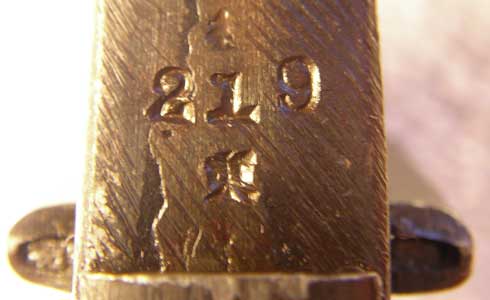 The follower has these two unusual marks on it from the bottom of the bolt. The bolt doesn’t lock back on the tab on the back of the magazine follower the way it is supposed to, so the bolt slides over the follower, causing these marks. The follower seems to come up at an odd angle. A slight touch on the front of it snaps it into the correct position to hold the bolt back. 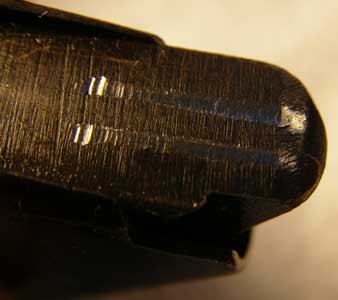 The mechanism of the Type 94 uses an unusual downward floating locking block. It can be seen in the forward/upward locked position here (the solver bit in the “window” between the frame and slide). When the gun is fired, at first the bolt and barrel recoil together for a couple of millimetres.

Then the locking block starts to slide downward and backward, unlocking the action.

Here it is after disappearing down into its slot and unlocking the action so the bolt can continue its rearward travel alone. 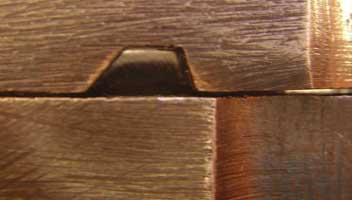 This is the underside of the bolt, which can be exposed by locking the bolt back on the magazine and turning the gun upside down. The bottom of the firing pin is the silver-coloured bit in the centre. It has to be pushed forward (to the left in this photo) so that it frees up the crossbolt in order to commence disassembly. 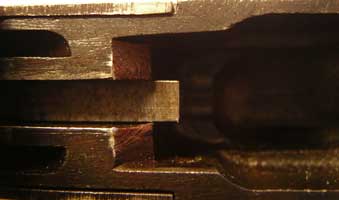 Once the firing pin is all the way forward, this crossbolt (the oval piece whose end can just be seen here) can be pushed out towards the right. The barrel and bolt can then be removed. However, you have to be careful as the barrel is under a lot of spring pressure and can easily go shooting across the room if it gets loose. Everyone has their own method of holding all the bits in place while doing this disassembly. Most of them are easier if you are fortunate enough to be equipped with three hands. The little kanji mark to the left of the crossbolt is the inspection mark sha on its side. It was adopted to replace the N they used to use when the Japanese government began discouraging the use of Roman (i.e. English) letters. 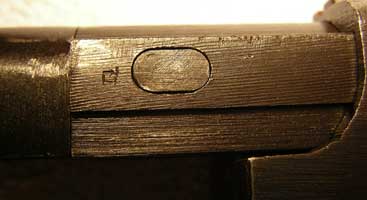 Click here to go back to the Type 94 Photo Gallery: t94gallery.htm

Last updated: July 11, 2005. All contents are copyright Teri unless otherwise specified and may not be used elsewhere in any form without prior permission.